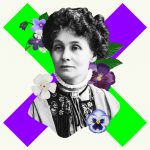 Wimen an lassies across the UK are being invited tae gaither in the streets on the four capital cities on the 10th June – tae tak pairt in a mass procession, to mark the centenary of the Representation o the People Act – that gave the first British wimen the richt tae vote.
Tae fin oot mair aboot ‘Processions’, Frieda Morrison met up wi the Scottish Co-ordinator, Jean Cameron – ootside the Scottish Parliament in Edinburgh.