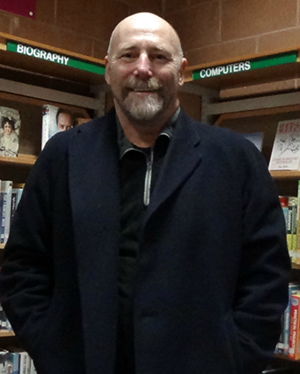 In this auld classic fae the cauld hinner enn o 2016, Frieda had Hamish McDonald in fir a guid lang blether.

Hamish wis ae year intae his residency as the Scots Scriever soon at the National Library o Scotland – a post he aquittit himsel o awfy weel in his twa years doon in the capital – an cam tae speak tae us aboot mony things, but aboot his Wee Windaes project in particular.

Noo, Hamish micht hae muived on tae ither things, but his legacy as Scriver aye bides on in the Wee Windaes site he helped create.

The site in effect unpacks an presents in a gey approachable wey some o the Scots content that oor National Library hauds in its innumerable stoorie kists doon in the vaults. On the site ye’ll find sic ferlies as an introduction tae John McNeillie, a Gallowa novelist wha pit guid Sooth-West Scots intae the lave o his work. The site has audio recordins, images an extracts fae the buiks, aa tae gie the general reader an insicht intae the scriever.

The treasures, that include Neil Gow’s original pieces o sheet music, some o which are owre twa hunner an fifty year auld, were bein conserved an stored in the Wighton Heritage Centre in Dundee.

“There’s not a lot of Scots films out there. So basically we built resources around the Gruffalo and the Gruffalo’s Child. Doing a screening of the film, then having a special guest reading in Scots, and getting the kids to write a film review in Scots.”

Rare. And ye can find oot aboot what Into Film are daein here: https://www.intofilm.org/scotland